When attacks suddenly begin after she starts dating three men, Sephanie must discover who’s behind it in order to claim her three men.

Blurb:
Kassius, Teague, and Berenger are dealing with serious vandalism on their property, but 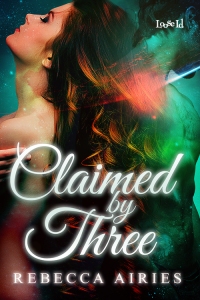 they aren’t waiting any longer to claim Sephanie. They intend to draw the beautiful, curvy woman into their lives with romance and all the sex she can handle while they discover who is behind the trouble.

Sephanie has always wanted a menage and jumps at the chance to date the three sexy men. Their first dates are everything she’s dreamed of and leave her craving more. When vandalism and sabotage begins to focus on her, Sephanie doesn’t understand it, but is determined to stay with her men.

The person behind the attacks won’t stop until he has what he wants. And it seems like what he wants is Sephanie, Kassius, Teague and Berenger are having none of it. Sephanie is their woman, and they’re going to keep her safe.

Excerpt:
Kassius stood and let her slide out of the booth. He didn’t intend to stay there. He’d give her some time with Berenger, and then he’d join them.
“She’s a little curious about how we’ll work this out. She asked some questions about whether the interaction will be one-on-one always or together. Don’t let her wonder too long.” Teague relaxed back in the booth, but his eyes were on Sephanie.
“I’m not going to. After watching you dance with her, I need to feel her moving against me.” Kassius hadn’t expected the possessiveness or the desire to feel this intense.
“She’ll drive every thought out of your mind. I can’t wait until I can feel her curves without the clothes.” Teague smiled.
Watching her sent his mind flying to the carnal. He didn’t admit that aloud. He stood and walked toward the dance floor. He saw her hips rocking forward in time to the music. That had to be making Berenger crazed. The sight of it urged him to take her somewhere more private so he could feel that movement skin to skin.
“Ready for me to join you, baby?” he asked when he reached them.
She turned her head. “Oh, yes.”
She started to turn toward him, but he put his hand on her shoulder, stopping her. “Stay in that position for now, Sephanie. I’ll ease in behind and enjoy the feel of your delicious ass wiggling against me.”
He suited words to action. He settled his palms on her hips, letting her dance but needing the contact with her. Her hands lifted to Berenger’s shoulders and rested there. She continued to move to the beat. The soft swish of her hips rubbed her ass across the ridge of his cock with every shimmy. Even though they were separated by her dress and his pants, a streak of raw hunger slammed through him with those light brushes. He loved dancing with her, but his body tensed more with every moment that passed. The aching torture was worth it. She relaxed and appeared to enjoy herself.
Her ass rocked back and ground against his cock. He drew in a hissing breath. He thrust his hips forward for a longer, firmer caress, but she once again moved to the beat as if it hadn’t happened. He managed to keep with them, but his mind wasn’t on the dance.
“She did that on purpose,” Berenger said before his head lowered. He nibbled along the curve of Sephanie’s neck. “She did the same thing to me and laughed while I stood still in the center of the dance floor.”
“Well, let’s see how she likes a little of the same treatment.” Kassius smoothed one hand up and let it trail inward over her belly.
He skimmed it up under the curve of her breast, appreciating the weight for a moment. She drew in a breath. He hoped she wondered what he’d do and if anyone might see. The low light on the dance floor provided enough privacy he didn’t have any qualms about it. Only the three of them would know with certainty where he touched her.
He swept his palm upward, letting it graze over the taut nipple. He wanted to spin her around and take a look at her again. He could feel the heat of her body through that dress but knew she probably wore some kind of bra. He wished he could slip his hand inside her dress to discover what was beneath but he’d have to wait. Her dress didn’t give him that kind of easy access.
She stiffened. One of her arms tried to block him from roaming any farther. “Someone will see.”

About the author:
Rebecca Airies lives in Abilene, Texas. She cohabits with two very demanding cats that are certain every flat space in the house belongs to them. She spends her time writing, fighting the cats for the laptop desk, and dreaming up new ideas. She loves creating fantasy, paranormal, and sci­fi worlds. She’s always working on at least a couple of stories, because those characters are so persistent. When not writing, you can find her playing cards with friends, reading, gardening, crafting, and playing video games. Everyday life might be normal, but the fantasies which inspire her writing are out of this world. 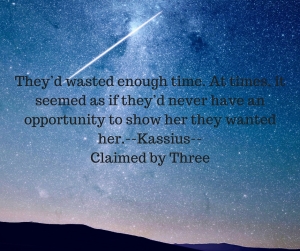 2 thoughts on “New Release: Claimed by Three by Rebecca Airies”